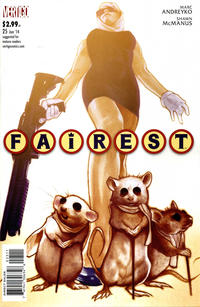 You can throw platitudes around all you like, Rose, but that man tried to have me killed! In front of my children!

Appearing in "Of Men and Mice, Part Four: Moustrap"Edit

Synopsis for "Of Men and Mice, Part Four: Moustrap"Edit

Once upon a time, Cinderella was accosted once again by her step-sisters, who were abusive. Sneakily, she used her broom to trip one of them and caused her to fall down the stairs. Before she could run away, her step-sister grabbed her by the ankle.

Now, Cinderella is returned to that feeling as she attempts to swim up to the surface of the water for air, and her step-sister keeps her held underwater by her ankle. Her friend Marcel is also struggling for air, and the effort has caused his ability to maintain human form to wane. Desperate to herself and her friend, Cinderella pulls the gun from her hip and tries to shoot her step-sister, but unfortunately, she loses consciousness. To her step-sister's surprise, though, Cinderella and Marcel are rescued by Ramayan. When he attempts to perform CPR on her, Rama gets a face full of water, and he happily hugs her with the knowledge that she's okay. The step-sister, meanwhile, was eaten by Veruna, who graciously delivers them all to New York City.

Meanwhile, in Fabletown, Snow White is angrily warning Rose Red to give up Prince Brandish, who killed her husband Bigby. After hanging up on Rose in anger, Snow White receives a knock at her door from Cinderella.

At Brandish's castle, his rats are surprised to find a woman in Brandish's place, demanding an update on the rats' progress.

Meanwhile, the Three Blind Mice, discover with surprise that the mundy-fable rat creatures who attacked Snow White all share the same father. On their way to inform her, though, one of their number discovers the desiccated corpse of one of one he recognizes as his brother - which means that one of the three is an imposter and a murderer.

Elsewhere, the Fairy Godmother wakes from her coma with a start, remembering suddenly all that she forgot. By the time her nurses get to her room, though, she is long gone.

After briefing Snow White on all that they learned in India after locating Marcel, Cinderella and company are interrupted by violent knocking at the door, and they are surprised to see the remaining two blind mice outside, being chased after by a host of villainous rat-mundy hybrids.

Retrieved from "https://heykidscomics.fandom.com/wiki/Fairest_Vol_1_25?oldid=1424847"
Community content is available under CC-BY-SA unless otherwise noted.