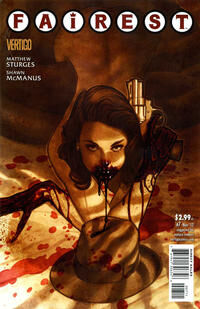 I never met the real you -- only a monster who'd lost herself in a dream.

Beast has been around for some time, but with each new era, his persona has evolved with the age. This time, he is a hardened private detective, on the lookout for a femme fatale murderess called Lamia. At the scene of one of her crimes - the third in a short time - he is unpleasantly surprised by the appearance of his rival Saint-George, who is also looking for her. Saint-George is curious as to why Fabletown always sends Beast instead of Bigby Wolf when it comes to Lamia. Beast brushes him off.

Beast goes to the Hawk Lounge, where he asks the bartender about the recent victim Johnny Marais. The bartender reveals that he went off with a smoking woman. The woman is obviously Lamia, and Beast is very intent on finding her. She works for an agency that sends girls to different clubs in Los Angeles on a rotation.

Meanwhile, the Lamia works the Platinum Club, and encounters a very hands-on customer, who she invites back to her penthouse apartment at midnight. Beast arrives soon after, only to find that he has been beaten there by Saint-George. The rival detective is still curious as to why Beast has made the Lamia case so personal; why he refuses to work together on it. Suddenly, Beast spots Lamia, and gives chase. Before he can catch her, the woman transforms into a snake, and slithers through a vent. Even though his gun is drawn, Beast cannot bring himself to shoot her before he is caught by police. The police can't keep him for any crime, and after they release him, a friend of the man who met Lamia earlier asks Beast to look into it.

Lamia seduces her victim, and then brutally murders him, only to have Saint-George find her too late. She tries to use her wiles on him, but he responds with anger, and attacks her with his sword. Beast arrives, suddenly, and knocks Saint-George aside. Tears in his eyes, Beast squeezes her around the neck until she loses consciousness.

Lamia is actually Beauty, the Beast's wife. At least, she appears to be. Long ago, the snake Lamia attacked and killed Beauty, taking on her form. She remained in that form for so long, however, that she came to believe that she was Beauty. It was that lie that Beast fell in love with; the woman that Lamia had thought she was. Every now and then, though, Lamia's real personality comes out, and she goes on a killing spree. Beast has killed too, in order to protect the woman he loves. Bigby Wolf, Fabletown's real private eye is growing increasingly frustrated with Beast's twisted morality when it comes to Lamia's episodes.

Decades later, Beauty and Beast have had a daughter named Bliss, and are considering moving to Haven, and starting new lives. Beast is hopeful, but his wife is beginning to show signs of turning again.

Retrieved from "https://heykidscomics.fandom.com/wiki/Fairest_Vol_1_7?oldid=1424829"
Community content is available under CC-BY-SA unless otherwise noted.