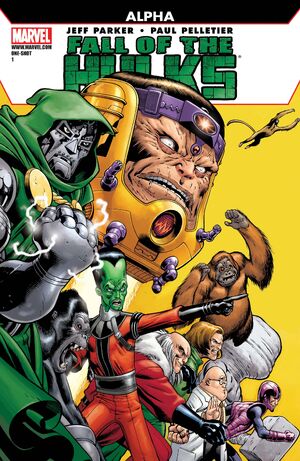 Appearing in "Meeting of the Minds"Edit

(Appears in flashback and main story)

M.O.D.O.K. The Leader. Mad Thinker. Egghead. Red Ghost and the Super-Apes. Doctor Doom. They make up the secret group who have analyzed every victory and every defeat in the Marvel Universe to create the perfect battle plan that results in FALL OF THE HULKS! The origins and shocking truths of some of Marvel's most dangerous villains are revealed as the biggest HULK EVENT yet begins! From fan-favorite creators JEFF PARKER (AGENTS OF ATLAS) and PAUL PELLETIER (WAR OF KINGS) comes this tale of the “Smartest There Is” and their quest to prove it, once and for all.

Retrieved from "https://heykidscomics.fandom.com/wiki/Fall_of_the_Hulks:_Alpha_Vol_1_1?oldid=1675932"
Community content is available under CC-BY-SA unless otherwise noted.