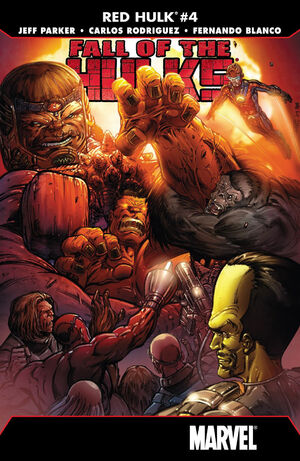 As the FALL OF THE HULKS comes crashing to the ground, we rejoin the evil geniuses who set it in motion…the INTELLIGENCIA! It was the sinister alliance of M.O.D.O.K., the Leader, the Thinker, the Wizard, and the Red Ghost that kicked things off with the creation of the Red Hulk, and it’s beginning to look like betraying the group was the worst mistake of Red Hulk’s career. Can the creation best the creators, or will the Intelligencia prove themselves Red Hulk’s rightful masters? Join Jeff Parker (AVENGERS VS. ATLAS, THUNDERBOLTS) and Carlos Rodriguez as the FALL turns towards WORLD WAR HULKS!

Retrieved from "https://heykidscomics.fandom.com/wiki/Fall_of_the_Hulks:_Red_Hulk_Vol_1_4?oldid=1641086"
Community content is available under CC-BY-SA unless otherwise noted.