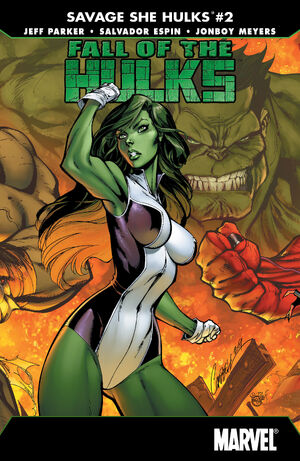 Lyra has found Jennifer Walters, floating in a tank. In the meantime, Walters is experiencing flashbacks that have lead up to her capture, before she is broken out by Lyra. She quickly explains to her idol that her cousin Bruce Banner and the Avengers are here to stop the Leader's plan. She also elaborates on how she joined the Frightful Four in order to find her, though she had to smash Boudicca to prevent Wizard from examining her. And just two nights ago, Boudicca's scan found Walters. Banner then made contact with her, who advised that she wait until her had arrived, otherwise they would've been put down quickly.

Walters acknowledges how smart her cousin is, even when they were kids. She also guess that Lyra's childhood was different from hers, at which Lyra remembers a man she killed back in the 23rd century. She then tells Lyra of how Bruce gave her a blood transfusion that transformed her into She-Hulk to avenger her father, contrary to the Sisterhood's propaganda that she was exposed to gamma radiation after breaking into a military base before going to avenge her mother. Lyra admits that even her mother Thundra never contradicted the Sisterhood's teaching.

When Lyra mentions about her encounter with her mother, Walters, getting back in her trademark costume, slaps her for that, stating that Thundra has been trying from years to get back to her century so that she could be born. Therefore, she had to avoid her own daughter so that it won't upset the timeline. As she further reprimands Lyra, explosions rock the Intelligencia Helicarrier. Next thing they know, Red She-Hulk crashes in, determining to kill Lyra for her betrayal, only to be kicked across the face by Walters. Enraged, Red She-Hulk makes a comeback, attempting to finish the job she started. She is beaten back and left hanging at the edge of a hole, at which Walters begins to pity her. She then attempts to convince her join them against the Leader, only for Red She-Hulk betray them and throw off the ship.

Retrieved from "https://heykidscomics.fandom.com/wiki/Fall_of_the_Hulks:_The_Savage_She-Hulks_Vol_1_2?oldid=1426299"
Community content is available under CC-BY-SA unless otherwise noted.