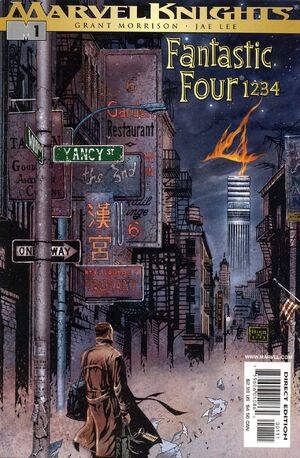 How to destroy a man: grant him his heart's desire. One.

As the Fantastic Four experience some downtime, the Thing tries (and fails) to reconnect with his past on Yancy Street, the Invisible Woman and the Human Torch bicker with each other and Mister Fantastic withdraws to his lab to do some thinking without interruption. When the Thing attempts to gain Mister Fantastic's attention, he himself is distracted by a partially dismantled Doombot that Doctor Doom is using to transmit his voice. The Thing is tempted to try on one of the Doombot's gauntlets and is thereby teleported to Doom's castle in Latveria. Here, Doctor Doom reveals a secret about his appearance that shakes the Thing deeply. In his confused state, the Thing is convinced to walk through a time machine in order to restore his original, human form. The process is a success, but the Thing (now simply Ben Grimm) finds himself back in New York where nobody recognizes him and he is denied entry to the Baxter Building. He is then knocked over and badly injured by a hit-and-run driver.

Retrieved from "https://heykidscomics.fandom.com/wiki/Fantastic_Four:_1_2_3_4_Vol_1_1?oldid=1426274"
Community content is available under CC-BY-SA unless otherwise noted.