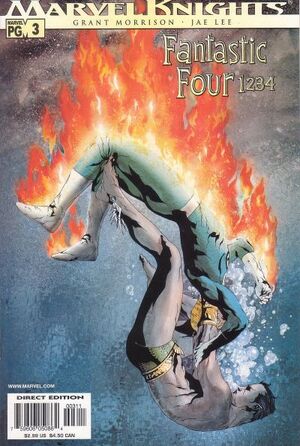 Appearing in "3: Darkness and the Mole Man"Edit

Synopsis for "3: Darkness and the Mole Man"Edit

After struggling to fight the creature due to the rain pouring down, the Human Torch seeks help from his sister. Namor's bio-electric aura prevents the Invisible Woman from intervening and he intensifies the storm such that it snuffs out the Human Torch's flame. The Human Torch falls into the hole left by the subterranean monster.

Ben Grimm wakes in a hospital to find that his right arm has been amputated above the elbow. He remains confused about what is going on and who is responsible for it. He eventually decides to find Mister Fantastic in order to resolve things.

The Human Torch finds himself in the Mole Man's lair, along with Alicia Masters. The Invisible Woman and Namor arrive shortly thereafter and Namor gets into an argument with Mole Man. The debate reveals that Alicia and the Human Torch were promised to Mole Man by Doctor Doom in exchange for his aid. Similarly, the Invisible Woman was promised to Namor. Namor refuses to consider himself a lackey of Doom's and breaks the alliance by smashing the ground of the cave and allowing seawater to flood in.

It becomes apparent that Doctor Doom has created a machine that allows him to manipulate reality (the Prime Mover) and that he is taking down the Fantastic Four one by one. He unleashes a giant Doombot against the Baxter Building in order to destroy his final target - Mister Fantastic.

Retrieved from "https://heykidscomics.fandom.com/wiki/Fantastic_Four:_1_2_3_4_Vol_1_3?oldid=1496040"
Community content is available under CC-BY-SA unless otherwise noted.