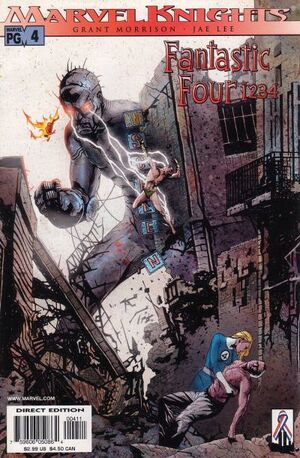 Mister Fantastic has been aware of Doom's machinations and has constructed a similar device to the Prime Mover. This allows him to perceive the core change that Doom made to reality in order to disorient the Thing - that Doom himself is merely a physical embodiment of Mister Fantastic's dark side.

The Invisible Woman saves Ben from a blast of energy released by Doom's robot and they find the teleportation gauntlet in the rubble. Namor and the Human Torch team up to fly through the head of the gigantic Doombot, destroying its eyes. The Invisible Woman and Ben teleport to Latveria and use the time machine to revert Ben to being the Thing. The Invisible Woman then attacks Doom as he uses the Prime Mover and the machine is destroyed. The Thing teleports back to New York and clobbers the huge robot.

Retrieved from "https://heykidscomics.fandom.com/wiki/Fantastic_Four:_1_2_3_4_Vol_1_4?oldid=1426277"
Community content is available under CC-BY-SA unless otherwise noted.