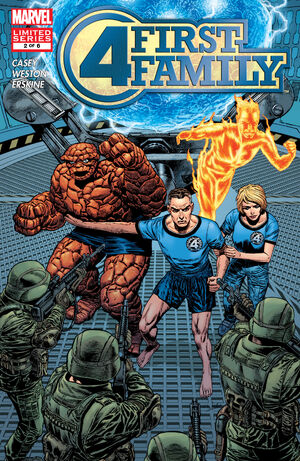 Reed, Ben, Sue & Johnny battle Perry until security arrive and they shoot him dead. Reed works out a plan with General Montgomery to secure their freedom from the facility in exchange for dealing with menaces like the Mole Man when he pops up. Ben doesn't want anything to do with it until Sue convinces him. Franz mentally contacts Reed again after having escaped from the facility and admits that Perry's murderous rampage was his doing. Before breaking contact, Franz tells Reed that he's with his family. Franz explains to his wife and children that he has attained a higher evolutionary stage and that they are now rendered superfluous. Franz uses his mental abilities to murder his wife and children.

Appearing in "Remember The Alamo"Edit

Synopsis for "Remember The Alamo"Edit

As the cosmically irradiated foursome answers their first call to action, Reed Richards ensures that he and his friends don't end up as government lab rats.

But will Sue, Johnny and Ben go along with his plans? Plus, the secret of the FF's first adversary (hint: it wasn't the Mole Man!).

Retrieved from "https://heykidscomics.fandom.com/wiki/Fantastic_Four:_First_Family_Vol_1_2?oldid=1551506"
Community content is available under CC-BY-SA unless otherwise noted.