Prepare for the Fantastic

Reed Richards, a brilliant but timid and bankrupt scientist, is desperate to get funding for a space mission to study a cosmic storm, approaches multi-millionaire industrialist Victor Von Doom. Victor agrees to let Reed and his friend Ben Grimm use his facilities, but decides that he and his assistant (also love interest, and former girlfriend of Reed) Susan Storm accompany him, and the mission is piloted by Von Doom astronaut Johnny Storm (Susan's brother and former subordinate of Ben).

On the Von Doom space station, Ben is sent to arrange plants for experiments with the cosmic storm, while Reed monitors its approach. Whilst Ben works, Reed find the storm is accelerating much more than he anticipated, and tries to get Ben back inside before it hits.

When Victor refuses Reed's plea to abort the mission, the station is engulfed by its vast energies. Whilst Victor is seemingly safe behind the station's shields, the others attempt to rescue Ben (who was space-walking at the time) and are exposed to the cloud.

The astronauts make it home intact and are taken to Victor's private hospital to recuperate. There, they begin to experience physical changes. Reed find his body is able to stretch far past normal lengths. Susan finds she is able to turn invisible, and Johnny finds he can engulf his body in flames without being harmed, and has some limited flying ability. Ben, however, is traumatized by his transformation into an orange, rocky creature of superhuman strength. Ben flees the hospital, heading back home.

In New York, Ben contacts his former fiancee, but she is terrified by his new appearance. Dejected, Ben retreats back into the shadows. He finds himself on a bridge, where a man is contemplating suicide. In attempting to help him, Ben inadvertently causes a massive traffic accident. He goes to help, as the rest of the team turn up. Using their new-found powers, Reed, Susan and Johnny help to save everyone involved in the accident, and are hailed as heroes in the media.

Victor, meanwhile, is developing his own powers. The head wound he sustained begins to spread, and reveals a metallic layer underneath the flesh. He also finds an ability to affect electrical equipment and that metallic objects near him begin to vibrate.

The Fantastic Four (although they have yet to adopt this name) all move into Reed's apartment in the Baxter Building, where Reed works to reverse the storm's effects, particularly for Ben. He subjects them all to tests, finding the hottest temperature Johnny can reach (as hot as a supernova, capable of vaporising all life on the planet) and finding the triggers for their powers. (He finds they are caused by emotion: when Susan is annoyed or angry she turns invisible. When Johnny is particularly excited, he can flame-on). However, he cannot work out why Ben is unable to turn his powers on and off. Johnny, tired of being cooped up inside, runs off to participate in a motocross event, exploiting his powers to pull off tricks. As he finishes, the media swarms him, pressing for details of the team. It is now that he gives the team their names- Mr Fantastic, the Invisible Girl, the Human Torch, and The Thing. Ben is particularly put out by this moniker.

Victor is called to a meeting by his stockbrokers, who inform him that due to the disastrous space mission, his company is in serious financial danger, and they are planning on withdrawing their capital. It is a final comment, suggesting Victor returns to his home country of Latveria, which causes Victor to snap and murder the head of the stockbrokers that evening.

Victor decides that Reed is responsible for his problems, and by proxy the rest of the team. He finds Reed has been working on a machine to reverse their powers, but it lacks enough electricity to work. However, that is not a problem Victor has any more. He lures Ben into the machine and powers it himself, turning Ben human again. Victor then kidnaps Reed, and begins to freeze his body, knowing that if rubber is super-cooled it becomes so rigid that it can be shattered. He fires a heat-seeking missile at Johnny, knowing the Human Torch to be the hottest item in the vicinity.

Ben, meanwhile, realizes that if he is to be any use to his friends, he must become The Thing again. He steps into the machine.

Susan tries to stop Victor and save Reed, but on her own she is not powerful enough. Fortunately, Ben, now The Thing again, arrives just in time to initiate the final showdown.

As Johnny appears again, having avoided the missile and caused it to fly into the river by setting fire to a garbage barge and flaming off, the Fantastic Four is united against Doctor Doom (his body now completely metallic, and his face covered by the familiar mask). Reed co-ordinates an attack utilizing all their powers: Johnny flies around Doom, heating up to full supernova ability, whilst Susan holds a force-field around him to contain the heat. As those two members eventually stop, exhausted, a superheated Doom advances on the other two. Ben breaks open a fire hydrant, and Reed shapes his body into a funnel to shoot the water at Doom, cooling him rapidly and freezing his metal body solid.

Ben informs Reed that he has accepted his condition with the help of Alicia Masters, a woman for whom he has developed feelings, and the team decide to embrace their roles as superheroes and unite officially as the Fantastic Four. Reed takes Susan aside and proposes to her, which she accepts.

Von Doom, meanwhile, is last seen loaded into a crate and shipped back to Latveria. The electronics on the ship experience unusual interference, and it appears that Doom is not dead after all.

As in almost all of the previous Marvel Comics-based films, Fantastic Four co-creator Stan Lee makes a cameo appearance. He is Willie Lumpkin, the mailman who greets the team on their way to the Baxter Building elevator.

A number of other actors and actresses audition for roles in the film. These include:

The film was released in the United States on July 8, 2005. It was the third superhero film of the year, after Elektra and Batman Begins. 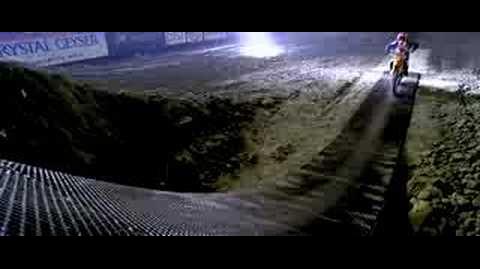 The critical reaction was overwhelmingly negative, scoring only a 26% at Rotten Tomatoes and 40% at Metacritic, both movie review aggregation websites. The movie was criticized for weak storytelling, poor science, and paper-thin characters — especially the bland Doctor Doom, arguably one of the hallmark villains in the Marvel Comics world. In addition, Jessica Alba's performance earned her a Razzie nomination for Worst Actress.

Many critics felt that this movie was widely surpassed by both Batman Begins and Sin City (also starring Jessica Alba), two comic book movies that were released in the same period. A major disappointment with the movie was the choice of casting, as neither Alba or Chris Evans have natural blond hair. Evans' hair was cut to make special effects easier but by doing so he loses the look of Johnny. The Storms while working for Doom were seen as "anti" Richards and Grimm.

Those who did like the film to some degree often praised Michael Chiklis for faithfully depicting his character's difficult adjustment to his transformation in a moving fashion while Chris Evans' character was considered a refreshing change of pace for modern superhero adaptations of a superhero who immediately takes delight in his powers without a resulting tragedy linked to them. However, many fans derided the producers' decision to place Chiklis in a bodysuit rather than using computer-generated effects or by the very least in a convincing body suit and make-up similar to what was seen in the movie version of the comic book Hellboy. Film critic Roger Ebert put this film at number 10 on his list of the top ten worst films of 2005. MSN ranked it #4 in their list of "worst superhero films."

Fantastic Four proved a box office hit on its opening weekend. By September 2005, the film had totaled over $330 million worldwide with a domestic gross of $154 million. In addition the movie also did very well on the DVD Sales.

Among the deleted scenes included on the December 2005 DVD release:

There are three slightly modified penultimate scenes concerning the attack on and subsequent defeat of Doctor Doom - one in which Reed uses his body as a funnel to direct a stream of water at Doom, one in which he doesn't, and one in which Doctor Doom's line "Is that the best you can do, a little heat?" is cut short, having the "..a little heat?" portion removed.

After the release of The Incredibles, the ending of the movie was rewritten because it was thought to be too similar.

There are two different versions of a scene which includes Jessica Alba and Ioan Gruffudd as Sue and Reed respectively. One version (the original) features the pair in the Planetarium, in which they communicate their feelings for each other properly without an argumentative tone. This ends in an inevitable kiss. The second version (used in the theatrical release) features the two outside, looking towards the Statue Of Liberty. Similar lines were used, but it ended where Susan turns invisible before Reed can kiss her. A joke was used during the line "a stronger man": Instead of Reed giving himself a square jaw (as he does in the theatrical release), he makes his skin look like the X-Men's Wolverine. Actor Gruffudd breaks the fourth wall and looks directly at the camera as he does this, suggesting the scene might have been filmed as a joke (similar to a practical joke filmed for the first X-Men film, in which stunt coordinator Scott Leva dressed up as Spider-Man and ran onto the set in the middle of a scene).

The novelization of the film contained a number of scenes which did not appear in the final cut; most notably a small number of scenes that drastically developed the character of Alicia Masters.

Sky Movies in the UK actually show a different version of the film to the theatrical or DVD releases. Among the changes, are the song playing in the bar scene not skipping when the Thing takes a step, the planetarium scene being reinstated and the masked Doctor Doom's voice changing from his regular voice to having an effect over the speech. Other parts of the film, such as Thing and Doom's underwater fight, are shortened whereas Reed's involvement in stopping Doom is removed.

In June 2007 an extended cut was released, incorporating over twenty minutes of deleted scenes.

Its financial success has led to the sequel, Fantastic Four: Rise of the Silver Surfer, which debuted in theatres in 2007. It featured The Silver Surfer and Doctor Doom as its central villains, with an appearance by Galactus.