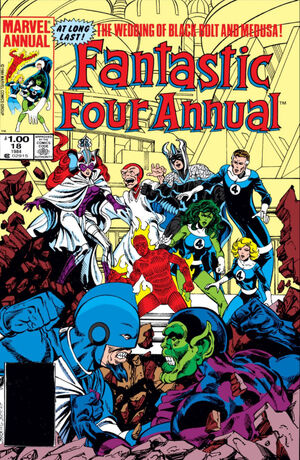 It is my discipline to be able to sense the weakest spot in any object -- And my power to shatter it.

Appearing in "Something Old, Something New"Edit

Synopsis for "Something Old, Something New"Edit

Several months since She-Hulk was in Attilan with the Avengers, now she's here with the FF, conveyed to the moon by Lockjaw for King Blackantor Boltagon & Lady-in-Waiting Medusalith Anaquelin's formal wedding. Gorgon eyes She-Hulk, he likes strength in a woman. Crystal shows Sue & Jennifer how little Luna has grown. They help the bride get ready. A sudden quake rocks Attilan and She-Hulk leaps off to investigate, but once outside city limits the gravity is moon-normal, & her last jump hurtles her into a wall of blue flame, Johnny catches her just in time. She tears a shaft into the moon rock so they can investigate the flame's source. Rather than trouble Karnak with pinpointing a spot to blast, She-Hulk presses a button before knowing what it does; a boobytrap blasts her through the opposite metal wall. And the metal wall behind it. And the metal wall behind that. A single champion from each of the races Kree & Skrull has been chosen to end their generations long conflict for all time. The blue flame was erupting power mains from the Kree-Skrull conflict beneath the Blue City. She-Hulk is familiar with the damage Kree & Skrull have done to Earth separately, & voices the opinion of all that she'd hate to see what they'd do if they joined forces. This gives Reed an idea. He gets them to stage a losing battle, & fake death behind Sue's forcefields when the Kree & Skrull team-up. The Watcher declares their war over; they are both the winners, with Earth as the loser, & he sends them home to their galaxies.

Retrieved from "https://heykidscomics.fandom.com/wiki/Fantastic_Four_Annual_Vol_1_18?oldid=1425143"
Community content is available under CC-BY-SA unless otherwise noted.