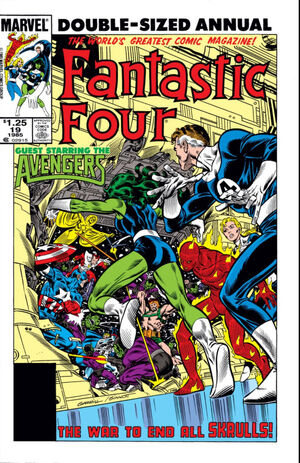 What is it? Another autograph? Ahh well ... the price of fame...

Appearing in "Summons from the Stars"Edit

Synopsis for "Summons from the Stars"Edit

Johnny’s flare brings Reed,Sue, Jen and Wyatt on air bikes from their double date. An alien Elan begs them for help against the Skrull (but it is a ruse: the Elan is a Skrull) Reed deduces this from his ship's entry angle, then hypnotizes the false Skrull into taking the FF back to his galaxy to turn the tables on his mistress called ‘Highness’. They steal a ship and proceed to the Imperial power asteroid where they witness the death of the Skrull Myrn who has developed a hyper-wave bomb.

Retrieved from "https://heykidscomics.fandom.com/wiki/Fantastic_Four_Annual_Vol_1_19?oldid=1425144"
Community content is available under CC-BY-SA unless otherwise noted.