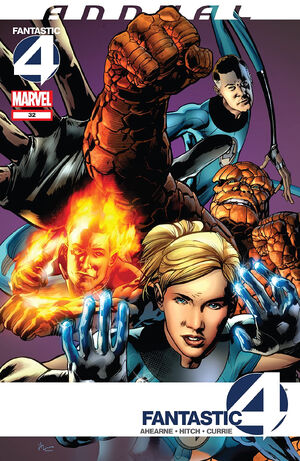 Appearing in "A Little Stranger"Edit

When Reed and Sue became parents it changed the Fantastic Four forever. What happens when Johnny Storm finds out he's going to become a dad? Especially as he has no recollection of the night in question. Turns out the truth lies within Johnny as the rest of the FF shrinks down inside the Human Torch where they find a trap laid by one of their most powerful enemies. How can Reed, Sue and Ben cut loose to win the battle without hurting Johnny? And how can Johnny defend himself from an outside threat without flaming on and killing his friends inside him? A wild journey into fatherhood and inside Johnny Storm!

Retrieved from "https://heykidscomics.fandom.com/wiki/Fantastic_Four_Annual_Vol_1_32?oldid=1723698"
Community content is available under CC-BY-SA unless otherwise noted.