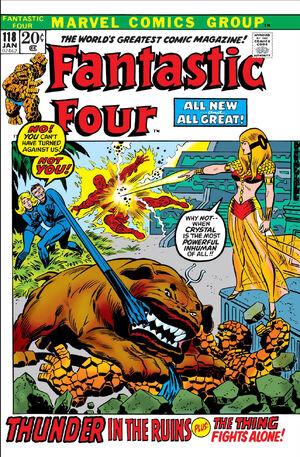 Appearing in "Thunder in the Ruins!"Edit

Synopsis for "Thunder in the Ruins!"Edit

Synopsis for "What Mad World?"Edit

A story telling where Ben and Lockjaw went during the fight between the FF and Diablo. Ben finds himself in an alternate universe where Reed Richards became the Thing. After fighting off a number of this realities Reed's robots, Ben learns that in this reality only Reed and Ben traveled into space in a rocket. What happened was Ben got the powers of Mr. Fantastic (winning the heart of the Susan Storm of this reality) and Reed became the Thing, losing himself in his work. Ben is then transported back to his own reality to find the battle is over, and tells the others he could not believe where he's been. Six Page Story