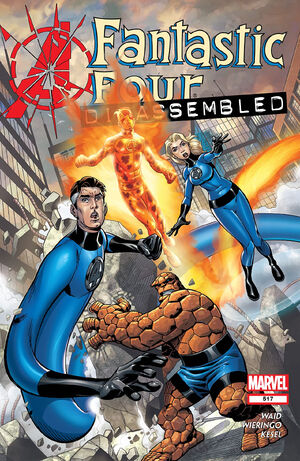 On the night of Halloween, a strange alien ship appears over Manhattan sending pylons into the waters surrounding the island. While Sue, Ben, and Johnny deal with the resulting tidal waves, Reed tries to determine where the ship came from. With The Avengers out of commission, the Mayor realizes he must turn to the highly unpopular Fantastic Four to aid the city after the entire island lifts into the air.

This issue is part of the Avengers Disassembled event

Retrieved from "https://heykidscomics.fandom.com/wiki/Fantastic_Four_Vol_1_517?oldid=1404957"
Community content is available under CC-BY-SA unless otherwise noted.