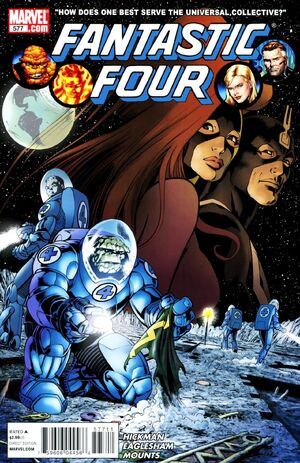 On the Blue Area of the Moon, the Fantastic Four discover that the history of the Inhumans runs much deeper, and richer, than previously believed. It's big adventure on a cosmic scale, its Prime Elements part three: Universal Inhumans!

Retrieved from "https://heykidscomics.fandom.com/wiki/Fantastic_Four_Vol_1_577?oldid=1649493"
Community content is available under CC-BY-SA unless otherwise noted.