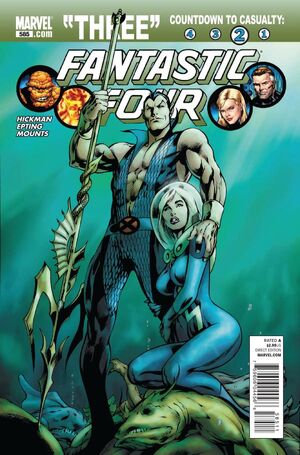 Appearing in "Three (Part 3): The Kings of Atlantis!"Edit

FANTASTIC FOUR #585 Written by JONATHAN HICKMAN Penciled by STEVE EPTING Cover by ALAN DAVIS World's apart from each other, the Fantastic Four embark on their individual journeys with one destined to end in tragedy and change the face of Marvel's first family. It's THREE, part 3:'The Last Kings of Atlantis'!

Retrieved from "https://heykidscomics.fandom.com/wiki/Fantastic_Four_Vol_1_585?oldid=1732853"
Community content is available under CC-BY-SA unless otherwise noted.