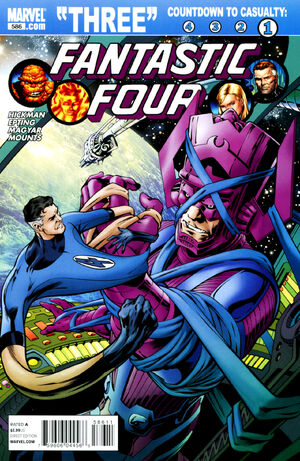 As the army of the Anti-priest begins an invasion of the Baxter Building, and the Invisible Woman is caught in between the warring factions of New and Old Atlantis, Reed Richards must decide the fate of the Earth amidst the chaos of Galactus devouring Nu-World.

Retrieved from "https://heykidscomics.fandom.com/wiki/Fantastic_Four_Vol_1_586?oldid=1655086"
Community content is available under CC-BY-SA unless otherwise noted.