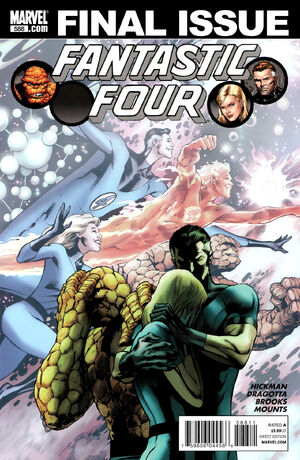 Following the death of Jonathan Storm, we spend a month

seeing how the remaining members of the Fantastic Four, the extended family, other heroes, and prominent villains react to the loss of this legendary hero. It's the epilogue to THREE: A Month of Mourning. PLUS: The Amazing Spider-Man consoles Franklin Richards in a second all-new tale!

Franklin Richards is alone in the roof of the Baxter Building mourning his uncle Johnny Storm. Spider-Man arrives and invites him for lunch. After they eat a hot dog (that Franklin paid 'cause Spidey was out of money), Franklin talks about the guilt he feels for not saving his uncle. Spider-Man tells him about how he also could've saved his uncle from dying, but didn't do it because he was still too young and had a lot of things to learn. He reminds Franklin that eventually the feelings of guilt and the nightmares will disappear and be replaced by the loving memories of Johnny. Then, Spider-Man takes Franklin back home while in the background, in the sky, Ben Parker and Johnny Storm smile as their nephews head to Baxter Building.

Retrieved from "https://heykidscomics.fandom.com/wiki/Fantastic_Four_Vol_1_588?oldid=1732856"
Community content is available under CC-BY-SA unless otherwise noted.