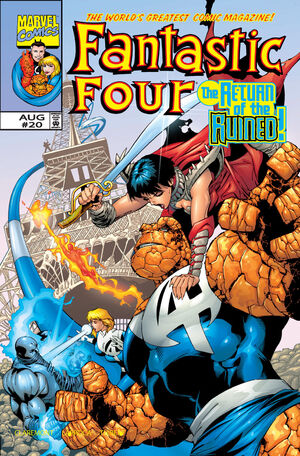 Appearing in "Since the Last Time We Saw Paris -- Itza Been Ruined!"Edit

The good news: the Fantastic Four have returned to Earth! The bad news: the Ruined (the mysterious foes who return from issue #1) are waiting for them! Can Mr. Fantastic, the Thing, the Human Torch and the Invisible Woman stop Paris, the city of lights, from becoming the city of skulls and bones?!

Retrieved from "https://heykidscomics.fandom.com/wiki/Fantastic_Four_Vol_3_20?oldid=1649746"
Community content is available under CC-BY-SA unless otherwise noted.