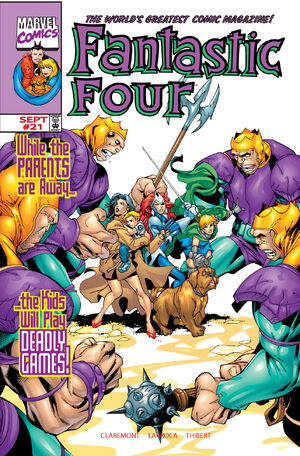 Theres a new crimelord making moves on the mob, and for hired muscle hes using the hordes of Hades... because he is Hades! Will the lord of the Underworld now rule our underworld? Standing against him: three intrepid adventurers... and a puppy!

Retrieved from "https://heykidscomics.fandom.com/wiki/Fantastic_Four_Vol_3_21?oldid=1425040"
Community content is available under CC-BY-SA unless otherwise noted.