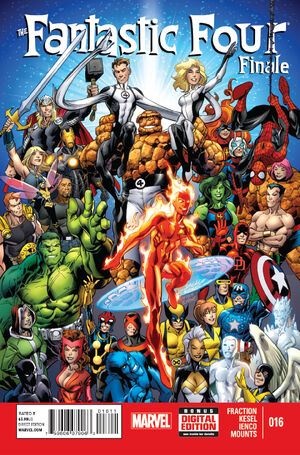 Appearing in "The Fantastic four are DOOMED! - Part Four: Four to the fourth power"Edit

The Fantastic Four are… DOOMED! Dr. Doom has taken on the power of Kang and Annihilus and is supreme ruler of the entire world. Good News: this is in the Doomed Universe. Bad News: our universe is next. The only ones in his way are the Fantastic Four and… the Fantastic Four! The Elemental Eight face off against Doom the Annihilating Conqueror with the fate of infinite realities in the balance! Plus the fate of Old John Storm! All in the fiery finish to the most mind-bending F4 adventure ever!

Retrieved from "https://heykidscomics.fandom.com/wiki/Fantastic_Four_Vol_4_16?oldid=1766963"
Community content is available under CC-BY-SA unless otherwise noted.