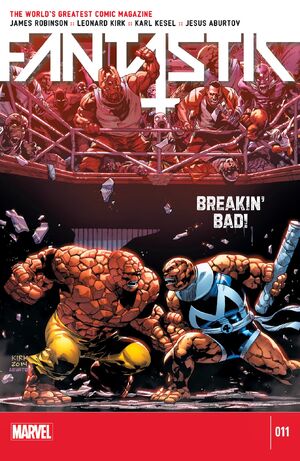 • While fighting a rogue’s gallery of powerhouse villains in prison BEN GRIMM finds an unlikely ally.

• With the information he’s learned, JOHNNY STORM’S best friend WYATT WINGFOOT is in danger, hunted by a mysteriously familiar bowman. Who can help Wyatt in his hour of need...

Retrieved from "https://heykidscomics.fandom.com/wiki/Fantastic_Four_Vol_5_11?oldid=1722096"
Community content is available under CC-BY-SA unless otherwise noted.