Part of the 'Fresh Start' event 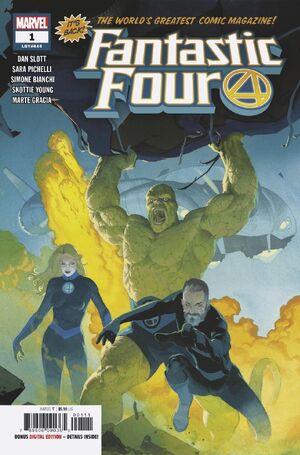 The way home is something you see with your heart.

Appearing in "Signal in the Sky"Edit

BECAUSE YOU DEMANDED IT – THE WORLD’S GREATEST COMIC MAGAZINE IS BACK!

Since the end of SECRET WARS, there’s been a gap in the Marvel Universe. A void no other team can fill. And it’s time for the world to move on. But can it? A life-changing decision by the Thing! A momentous declaration by the Human Torch! A clarion call-to-arms that summons Doctor Doom! And a signal in the sky that heralds the return of hope to the Marvel Universe! All this, and Alicia Masters adopts kittens! So cute! Plus, the Impossible Man!

AND BONUS STORIES ILLUSTRATED BY SIMONE BIANCHI AND SKOTTIE YOUNG!

IF YOU READ ONLY ONE MARVEL COMIC THIS MONTH, THIS IS THE ONE!

Appearing in "Our Day of Doom and Victory"Edit

Synopsis for "Our Day of Doom and Victory"Edit

Synopsis for "What the Pop?!"Edit 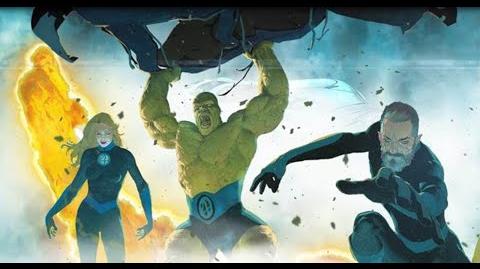 THE RETURN OF THE FANTASTIC FOUR – Fantastic Four 1 Launch Trailer

Retrieved from "https://heykidscomics.fandom.com/wiki/Fantastic_Four_Vol_6_1?oldid=1670026"
Community content is available under CC-BY-SA unless otherwise noted.