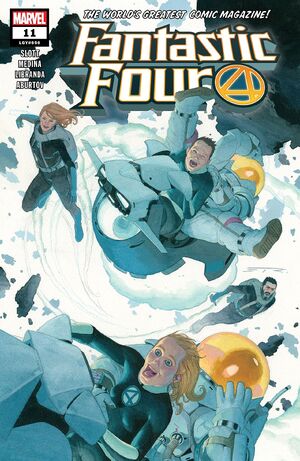 Unbelievable. Your kid used his disgruntled teen powers for good.

Appearing in "License to Quantum Drive"Edit

• Franklin and Valeria are growing up fast...but not fast enough to legally operate Fantasti-Cars in NYC!

• But wouldn’t you know it, the day of their big driving test is at the exact moment the entire Microverse might implode and take our reality with it!

• Get ready for a cosmic adventure with Marvel’s first family...and two members of New York’s Department of Motor Vehicles.

Appearing in "Everyone Is a Target: Part 5"Edit

Synopsis for "Everyone Is a Target: Part 5"Edit

Retrieved from "https://heykidscomics.fandom.com/wiki/Fantastic_Four_Vol_6_11?oldid=1670459"
Community content is available under CC-BY-SA unless otherwise noted.