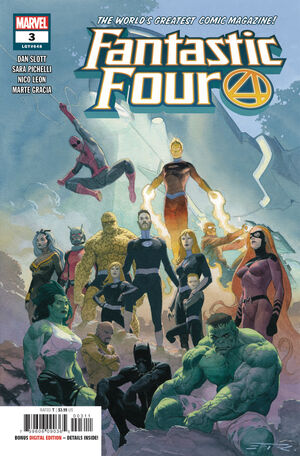 Nope... there's only one equation we've ever needed. Two plus two... equals four. That solves everything.

Every Fantastic Four member ever, joins the battle!

• The Fantastic Four is more than a team. It’s a family. And when the fate of the very Multiverse is at stake, that means it’s time for the ENTIRE family to have a reunion.

• Everything you’ve been waiting for? It’s in THIS issue.

Retrieved from "https://heykidscomics.fandom.com/wiki/Fantastic_Four_Vol_6_3?oldid=1670031"
Community content is available under CC-BY-SA unless otherwise noted.