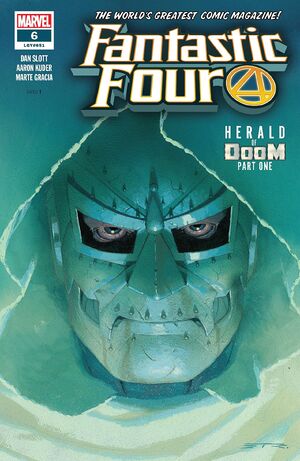 And so begins our war -- against the Devourer of Worlds!

Appearing in "Herald of Doom"Edit

• GALACTUS HAS RETURNED TO DEVOUR THE EARTH……and only one man can save us: DOCTOR DOOM!

• And where is that agitator, Reed Richards and his meddlesome family? What are they doing?

• They’re locked in battle against the brave new hero of the Latverian people, VICTORIOUS!

Retrieved from "https://heykidscomics.fandom.com/wiki/Fantastic_Four_Vol_6_6?oldid=1670327"
Community content is available under CC-BY-SA unless otherwise noted.