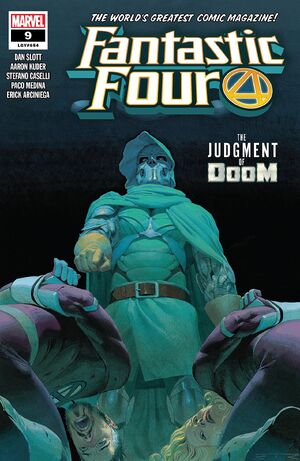 Before you would have had such merciful deaths. Now, the honor of Doom demands I make examples of you. Your slow, agonizing ends will be the stuff of legend especially yours, Susan.

Appearing in "Outside the Box"Edit

• One cruel act will forever change the relationship between the Fantastic Four and Victor Von Doom.

• The fate of Latveria and of the world and the balance of Cosmic Power in the Universe all rests on one decision!

• All will be revealed in the terrifying final chapter of “Herald of Doom”!

Retrieved from "https://heykidscomics.fandom.com/wiki/Fantastic_Four_Vol_6_9?oldid=1670330"
Community content is available under CC-BY-SA unless otherwise noted.