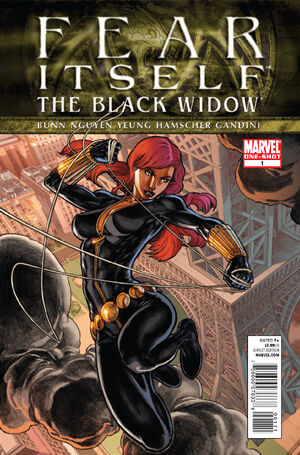 Appearing in "Fear Itself: Black Widow"Edit

Synopsis for "Fear Itself: Black Widow"Edit

As Merseille burns from disaster, Black Widow has been captured by a group of terrorists. The head terrorist gives his man Laurent to put a bullet in her head.

Six hours earlier, Widow, assisted by Peregrine, infiltrates a cathedral where the terrorists have taken the population fleeing the petrifying crisis in Paris hostage. But knowing she can't rescue the hostages, she instead go into the underground bunker underneath and ambushes the terrorists. At the same time, Peregrine save the hostages. Capturing a few, she leave Peregrine to interrogate them.

Widow attacks a ship where the terrorists intend to gain France's nuclear arsenal. However, she is captured.

In the present, the terrorists decide to go ahead with the plan to use the nukes to assault London. However, they discover that the Widow they executed by in fact a Life Model Decoy. Once she's confirmed that they're all together, she blows up the barge.

Watching from afar, Peregrine tells Widow that she saved millions of lives. However, Widow feels that it's hollow, noting the burning cities.

As fear ravages the streets of Paris, a group of diabolical extremists plot an act of mass terrorism.

In order to avert nuclear disaster, the Black Widow must brave a city in chaos, face down a crack team of deadly mercenaries, and infiltrate a well-protected government facility.

She’s on her own... which is just the way she likes it.

Retrieved from "https://heykidscomics.fandom.com/wiki/Fear_Itself:_Black_Widow_Vol_1_1?oldid=1653169"
Community content is available under CC-BY-SA unless otherwise noted.