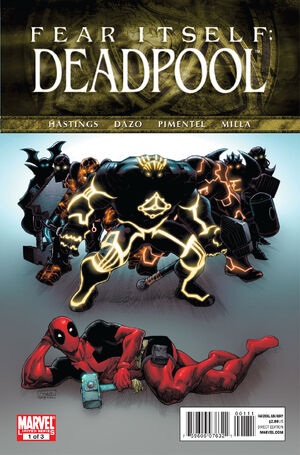 As the Marvel Universe is wracked with FEAR ITSELF, only Deadpool sees it for what it truly is...a way to make money. Has Deadpool really been chosen as one of the worthy, granted one of The Serpent’s Hammers? Or did he just take any old hammer and go to town with some rhinestones? Either way, when Deadpool hits the street with his shiny new mallet it’s—STOP! Hammer time. Don’t miss Deadpool playing whack-a-mole with the comic event of the season!

Retrieved from "https://heykidscomics.fandom.com/wiki/Fear_Itself:_Deadpool_Vol_1_1?oldid=1727196"
Community content is available under CC-BY-SA unless otherwise noted.