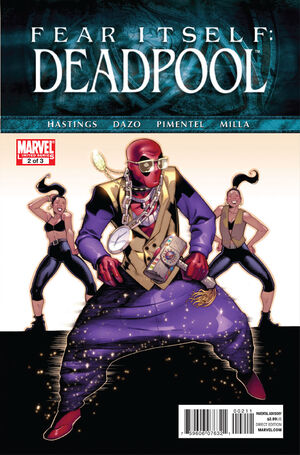 I don't like books. They think they're smarter than me.

Appearing in "Walrus By Night!"Edit

FEAR ITSELF TIE-IN! Deadpool learned well that when the world is shaken with fear, there’s only one thing to do—CASH IN BIGTIME. Frightened people will pay through the nose for some security...but why should he risk his neck fighting The Worthy when he can create his own, easily-beatable hammer-wielder? Enter: THE WALRUS! A foe Deadpool can defeat with both hands tied behind his back....or can he?

Retrieved from "https://heykidscomics.fandom.com/wiki/Fear_Itself:_Deadpool_Vol_1_2?oldid=1427029"
Community content is available under CC-BY-SA unless otherwise noted.