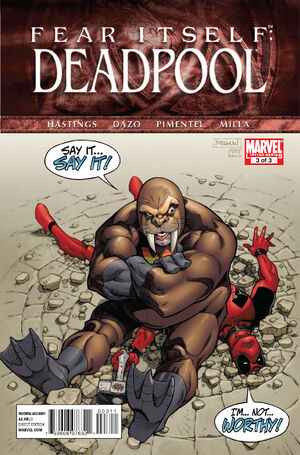 Appearing in "From Dusk Till Dawn"Edit

Memo to Deadpool: next time you gussy up a loser villain so you can beat him easily and scam people out of their hard earned money, make sure you don’t accidentally actually make him more powerful than you. Of course, that assumes you’ll be willing to show your face after getting beaten by the now-unstoppable-but-still-incredibly-lame Walrus. Deadpool puts the hammer down and drives home the most irreverent tie-in of the year!

Retrieved from "https://heykidscomics.fandom.com/wiki/Fear_Itself:_Deadpool_Vol_1_3?oldid=1427030"
Community content is available under CC-BY-SA unless otherwise noted.