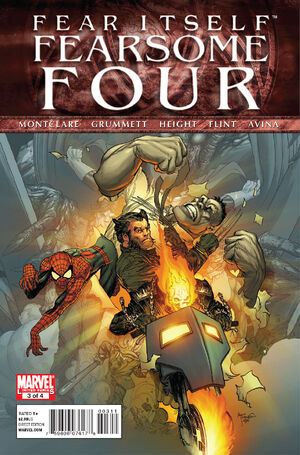 Heroes always do the right thing. So I've learned that as long as I do something, justice will ultimately prevail. It's a test of faith...a trial of strength...I just have to hold on tight and wait for the dust to settle. Maybe Hulk is right...that these are the days when herosim fails. And everything I stand for comes crashing down.

Howard takes on Spider-Man, She-Hulk faces her alternate reality cousin, Grey Hulk, Ghost Rider battles Frankstein's Monster, and Wolverine squares off with Nighthawk. Howard, webbed up by Spider-Man, is rescued by Nighthawk, who throws a trash can with Wolverine inside it at him. Nighthawk then comes to Frankstein's Monster's aid by cutting Ghost Rider's chains, freeing Frankenstein from his grasp, and throws him off his bike. Howard stands his ground against Grey Hulk, who has She-Hulk under his foot. Grey Hulk grabs him, angering Man-Thing into helping him. Meanwhile, Psycho-Man's fear-manipulation is only making Man-Thing stronger.

The team fights the New Fantastic Four again. During She-Hulk's second clash with Grey Hulk, he tells her that the heroes don't always win. Then, he throws a punch hard enough to send her all the way to Yancy Street, which was recently destroyed by the Thing. While she wonders where the heroes were when this happened, a water tower falls and nearly crushes a little boy. She rescues him, but several civilians hurl bricks at her, calling her a monster and blaming the heroes for the destruction. After destroying the water tower to scare them away, She-Hulk comes to the realization that these are the days when heroism isn't enough to save the day.

As the Fearsome Four lose the battle, Psycho-Man finds the mechanical gizmo that Howard has been keeping secret, which Psycho-Man calls the Absolute Annihilator. Surprised that he has it, he takes it from him and explains that the user can destroy anything with it if that person can control his fear, however, it appears he can't use it either.

The others ask Howard what it is, so he finally tells them that it is the No-Thing, a weapon Man-Thing gave him a long time ago. She-Hulk wants him to use it on Man-Thing before it's too late, but Howard is determined to find another way to save his friend. The others ask him what he would want Man-Thing to do if Howard suddenly became strong enough to destroy the city. As Man-Thing grows more powerful, Howard tries to use the No-Thing, realizing that Man-Thing's been stalling until Howard could find the courage to use it. However, the No-Thing doesn't seem to be working.

WHAT’S OLD IS NEW AGAIN! The fan-favorite New Fantastic Four team-up of Spider-Man, Wolverine, Hulk and Ghost Rider emerge from the shadows! Where did these flashes of the super-hero past come from? Only the Psycho-Man knows! With Man-Thing counting down to a full-scale meltdown, and ever more frightful characters converging on the living time bomb, how can the Fearsome Four stop the madness?? Plus, our guest artist spotlights on this oddball team continue with Eagle Award winner Henry Flint showing us just how sensational She-Hulk can be!

Retrieved from "https://heykidscomics.fandom.com/wiki/Fear_Itself:_Fearsome_Four_Vol_1_3?oldid=1427071"
Community content is available under CC-BY-SA unless otherwise noted.