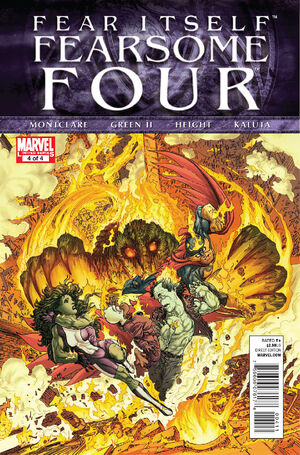 Appearing in "Part Four: The Only Thing We Have to Fear Is..."Edit

What kind of monster does it take to kill a monster? Man-Thing is a ticking time-bomb... and the clock just ran out. Ignited by FEAR ITSELF, the strange creature has lost control of his deadly powers and the Fearsome Four are forced to face their worst nightmares made flesh. Sometimes when you stare into the Nexus of All Realities, The Nexus stares back at you! Why should you fear Fear Itself? Find out in this incendiary conclusion! Including our final spotlight scene by Timothy Green II (IRON FIST, ROCKET RACCOON) following Howard the Duck’s heroic journey to save a world he never made!

Retrieved from "https://heykidscomics.fandom.com/wiki/Fear_Itself:_Fearsome_Four_Vol_1_4?oldid=1728776"
Community content is available under CC-BY-SA unless otherwise noted.