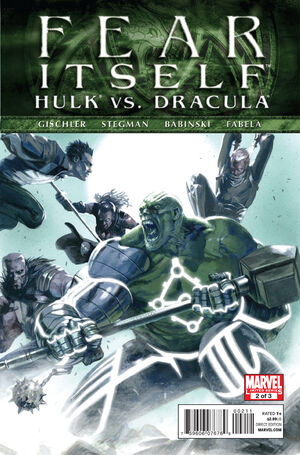 As the possessed, power-enhanced Hulk wreaks havoc through the countryside, only one group stands between him and untold destruction: The Vampire Nation! Dracula gathers the newly-united vampire legions to stop the unstoppable, but as volley after volley fails, it appears their only hope may be a mysterious stranger from Dracula’s past. Marvel craftsman Victor Gischler and artist-to-watch Ryan Stegman deliver a story with plenty of bite, and they aren’t afraid to draw blood!

Takes place after Fear Itself #5

Retrieved from "https://heykidscomics.fandom.com/wiki/Fear_Itself:_Hulk_vs._Dracula_Vol_1_2?oldid=1641256"
Community content is available under CC-BY-SA unless otherwise noted.