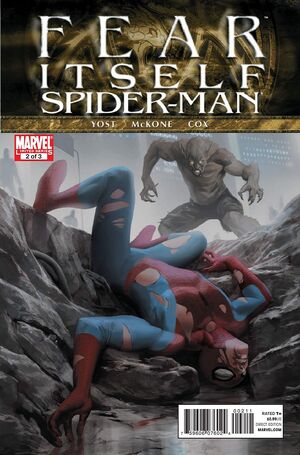 FEAR ITSELF TIE-IN The biggest event of the year continues as 'Fear Itself' tears New York City apart under the Serpent's influence. Spider-Man's right in the middle of it, protecting everyday people... from themselves. But two days in, there's no sign of hope, no sign of salvation, and Spider-Man finds himself at the mercy of a foe even he fears...VERMIN.

Takes place during Fear Itself #3

Retrieved from "https://heykidscomics.fandom.com/wiki/Fear_Itself:_Spider-Man_Vol_1_2?oldid=1726287"
Community content is available under CC-BY-SA unless otherwise noted.