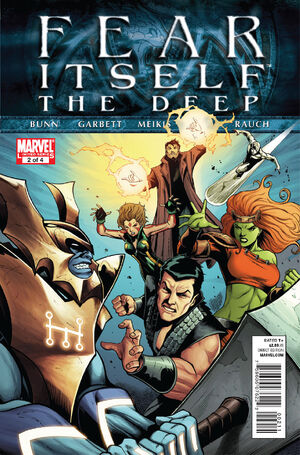 FEAR ITSELF TIE-IN The Sub-Mariner's kingdom has fallen! Namor and his allies--Dr. Strange, the Silver Surfer, the Savage She-Hulk, and Loa--must invade New Atlantis and wrest control from the sinister forces that have claimed the city. With Namor still shaken by the crushing defeat he has suffered, our heroes may be no match for the frightening opposition they're set to encounter as the Worthy’s lieutenants summon dark forces that spill into the oceans...and one team member may be forever changed as fear takes over.

Retrieved from "https://heykidscomics.fandom.com/wiki/Fear_Itself:_The_Deep_Vol_1_2?oldid=1640574"
Community content is available under CC-BY-SA unless otherwise noted.