Fear Itself: The Fearless Vol 1 1 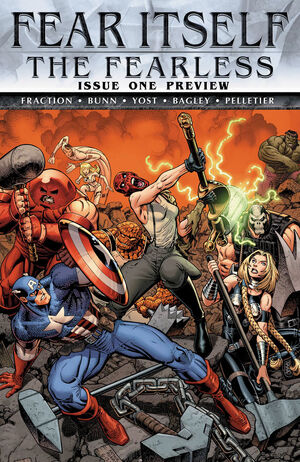 FEAR ITSELF AFTERMATH!
A new twice-monthly series featuring Captain America, the Avengers, and heroes and villains across the entire Marvel Universe! In the wake of FEAR ITSELF, CLASSIFIED. By the acclaimed writing team of Matt Fraction (FEAR ITSELF), Cullen Bunn (FEAR ITSELF: THE DEEP) and Chris Yost (FEAR ITSELF: SPIDER-MAN) and the powerhouse art team of Mark Bagley (ULTIMATE SPIDER-MAN) and Paul Pelletier (THE INCREDIBLE HULKS).