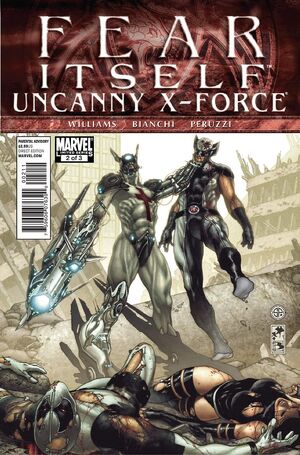 Appearing in "Before The Devil Knows We're Dead (Chapter Two)"Edit

FEAR ITSELF TIE-IN With the events of FEAR ITSELF causing worldwide panic, Jonathan Standish and his cell of rogue Purifiers look to take their murderous mission to the next level. Believing superheroes have brought about the end of the world, just how many innocents can these Purifiers kill? How many 'souls' can they save from the devil? And where will they strike next? If ever there was a group worthy of X-Force's lethal talents, this is it. But is there a grain of truth hidden in Standish's askew thinking?

Retrieved from "https://heykidscomics.fandom.com/wiki/Fear_Itself:_Uncanny_X-Force_Vol_1_2?oldid=1649420"
Community content is available under CC-BY-SA unless otherwise noted.