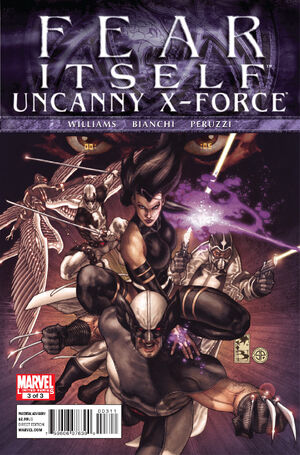 Appearing in "Before The Devil Knows We're Dead (Chapter Three)"Edit

FEAR ITSELF TIE-IN! With The Serpent's destruction spreading across the globe and time seemingly running out for Planet Earth, Jonathan Standish and his Purifiers make their final move. How many human lives can they take before the 'devil' claims the souls of the human race? And can X-Force successfully track down the location of Standish's 'brain bomb' and the Purifier's main target? In the final moral battle against sin, can a mutant kill crew possibly win?

This is the final issue of this three-issue Fear Itself tie-in. Preview Gallery