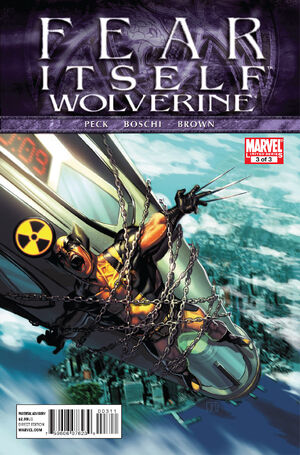 Appearing in "Fear Itself: Wolverine Conclusion"Edit

FEAR ITSELF TIE-IN! In this issue, the bomb drops...literally!

Strike, the mercenary group responsible for hijacking the helicarrier threatening New York, falls apart at the seams as Sutton reveals a growing madness that drives his actions.

How do you reason with a madman?

For Wolverine, it should be easy as s-n-i-k-t, but Sutton has other plans.

Meanwhile, Melita's on the ground reporting has made her a target, and not just for STRIKE.

FEAR ITSELF continues to carve a path of destruction through Wolverine and Melita's lives, and the repercussions will last a long time.

Retrieved from "https://heykidscomics.fandom.com/wiki/Fear_Itself:_Wolverine_Vol_1_3?oldid=1734504"
Community content is available under CC-BY-SA unless otherwise noted.