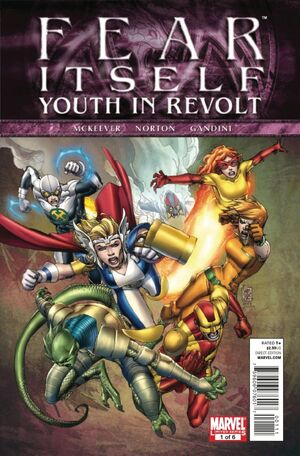 FEAR ITSELF TIE-IN With a growing sense of uncertainty and despair gripping the nation--and the world--the remnants of the Initiative program are sworn in as federal agents charged with keeping the peace. Their ensuing actions, however, threaten to plunge America's young heroes into civil war! Featuring AVENGERS: THE INITIATIVE stars THOR GIRL, ULTRAGIRL, CLOUD 9, KOMODO and HARDBALL--plus FIRESTAR, GRAVITY and some very cool surprises--YOUTH IN REVOLT brings the horror of FEAR ITSELF to the doorstep of a generation!

Retrieved from "https://heykidscomics.fandom.com/wiki/Fear_Itself:_Youth_in_Revolt_Vol_1_1?oldid=1729476"
Community content is available under CC-BY-SA unless otherwise noted.