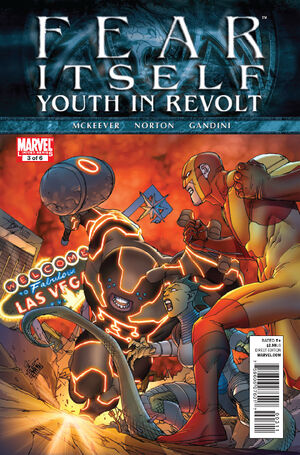 FEAR ITSELF TIE-IN The world has plunged into an abyss of terror and despair, and few places are worse right now than in Las Vegas, where the hammer-wielding XXXX XXXXX is passing though -- in his own unstoppable way! Luckily, HARDBALL and his HEAVY HITTERS are here to save the day! Um, right, Hardball and the Heavy Hitters? Right...?

Retrieved from "https://heykidscomics.fandom.com/wiki/Fear_Itself:_Youth_in_Revolt_Vol_1_3?oldid=1728271"
Community content is available under CC-BY-SA unless otherwise noted.