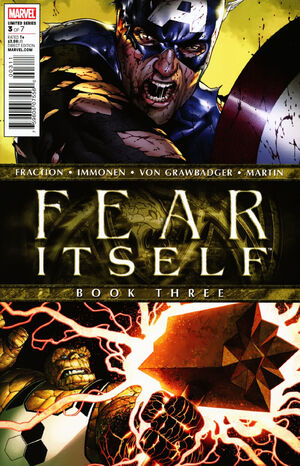 Appearing in "The Hammer that Fell on Yancy Street"Edit

Synopsis for "The Hammer that Fell on Yancy Street"Edit

In Asgard-Space, Loki tricks the guards watching over Thor in his prison cell into eating food that puts them to sleep, and he sets Thor free.

In Brazil, while running from Hulk, who has turned into Nul, Breaker of Worlds, Red She-Hulk tries to save two children. Though she succeeds, Nul throws her to the ground and prepares to attack. She does however stop him briefly by turning back into Betty Ross in an attempt to see if Bruce Banner is still in there, but realizes she has failed to do so when Nul prepares to kill her with his hammer. He is foiled, however, when Spider-Woman, Protector, and Ms. Marvel come to the rescue, and engaged Nul in combat.

In New York, Reed Richards asks Ben Grimm to try and lift the hammer that crash landed onto Yancy Street. Ben is quite aggravated by a man who hurls abusive insults at him for failing to save the Human Torch from getting killed and asks Reed if he can pretend that the hammer is that guy's neck. As he approaches it, it transforms him into Angrir, Breaker of Souls. With a single stomp, he destroys the surrounding area, screaming "'DIE!!".

Meanwhile, Thor and Loki escape the prison. Loki then explains to Thor that Asgard has been rebuilt as a war machine in preparation to attack Earth in an attempt to stop the Serpent. Loki leads him to a small group of Asgardians who do not agree with Odin's plan. Odin discovers them, but Thor manages to persuade his father into giving him time to defend Earth and is given back Mjolnir.

On the Quincarrier, Steve Rogers decides to join the others in the fight instead of just sitting around and watching.

In Washington D.C., a battered Captain America continues to fight Skadi, but is soon beaten to the ground. Skadi then tears off his bionic arm and pounds the bottom of her hammer into his chest. After leaving him to die, Black Widow, Falcon (Sam Wilson), Shang-Chi, and Valkyrie gather around him. With his last ounce of breath, Captain America tells Black Widow to warn the other heroes that the Serpent is coming.

Sin leads the most audacious attack on American soil the world has ever seen as global panic sets in and we fall sway to the power of fear itself. On Asgard, Loki hatches the scheme to end all schemes. And everywhere, the Serpent's presence is felt...never more so than when a major Marvel hero falls at his hands. The shock ending to end all shock endings...as the cycle of evil stretching millennia is at last completed.

Retrieved from "https://heykidscomics.fandom.com/wiki/Fear_Itself_Vol_1_3?oldid=1755118"
Community content is available under CC-BY-SA unless otherwise noted.