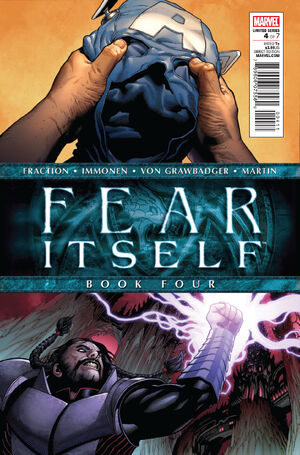 Appearing in "World on Fire"Edit

Synopsis for "World on Fire"Edit

Thor returns to Earth in Broxton, Oklahoma, where he is greeted by a mob of people angry at him and the rest of the Asgardians. After being told to move on by a mad resident, he flies away. Onboard the Quincarrier Tony Stark, Natalia Romanova, and Nick Fury stand over Bucky's dead body. Natalia questions Tony and Fury about what they know about the Serpent, who Bucky mentioned to her in his final moments. Thor arrives and tells them that the Serpent feeds on people's fear and grows stronger from it. Not only that, he tells them that Odin has plans to destroy Earth and the Serpent along with it. Nick Fury tells Tony and Thor to go get Steve Rogers, who resumes the title of Captain America in Bucky's stead.

Steve asks for the rundown on what's happening. Tony tells him about the Worthy's hammers and is told to come up with counter weaponry. Thor explains to Steve that the Serpent is a being similar to his father and feeds on the fear of others. He also tells him of a prophecy involving him slaying a serpent and dying at its hands. Steve asks him to speak to the Serpent.

Maria Hill asks Steve to come see something. Meanwhile, a boy fishing by himself in British Columbia sees several Atlantean bodies come to the surface. This is because of Nerkkod, Breaker of Oceans, which is what Attuma has become.

This gives the Serpent all of the power he needs to reach full power. His staff becomes a hammer, which he uses to raise his citadel. Maria Hill, Thor, Steve, and Tony witness it's rise from Maria's computer monitor. Shortly after, they head off in different directions. Thor heads to Antarctica to confront the Serpent, Tony heads to Oklahoma to speak to Odin, and Steve lands in Manhattan to join the Avengers and fight Skadi's forces, who have entered New York.

The Serpent becomes aware of Thor's arrival and sends in his troops. Tony, in hopes of getting Odin's attention, sacrifices his sobriety by drinking the bottle of wine given to him by H.A.M.M.E.R. Industries as "congratulations" for being able to rebuild Asgard.

As Thor continues to wipe out the Serpent's soldiers, the Serpent shows his face. In Manhattan, Skadi spots Steve from a rooftop and rejoices in the opportunity to kill Captain America a second time. Tony's sacrifice does not go unnoticed and he manages to get an audience with Odin. Skadi jumps off of the rooftop and attacks Steve with her mighty hammer.

The Serpent tells Thor about how he was the first king of Asgard and Odin is his brother, making Thor his nephew of his. The Serpent offers him a chance to work with him to defeat Odin, an offer Thor refuses. He then attacks the Serpent, only to be sent to New York, where he must instead face Nul, Breaker of Worlds and Angrir, Breaker of Souls.

Retrieved from "https://heykidscomics.fandom.com/wiki/Fear_Itself_Vol_1_4?oldid=1729499"
Community content is available under CC-BY-SA unless otherwise noted.