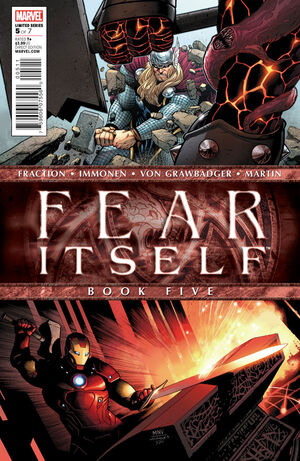 As Thor fights Angrir, Breaker of Souls and Nul, Breaker of Worlds, Captain America and the Avengers take on Skadi. Meanwhile, Tony Stark has won an audience with Odin and requests that he be allowed to build new weapons in his workshop.

On the battlefield, Thor reluctantly sends Mjolnir through Angrir's chest, putting him out of action for good. While Thor violently battles Nul, Franklin and Valeria Richards find Angrir, who's regained his humanity but is on the verge of death.

As Cap fights Skadi, the Serpent arrives on a floating Dark Asgard and proclaims the world is now his and orders everyone to bow down to him. He joins Skadi on the ground but is challenged by the Avengers. Their attempts to stop him had failed and they are all blasted by the Serpent's Hammer. Cap tosses his shield at the Serpent but he catches it and easily destroys it. With a swing of his Hammer, he completely destroys the surrounding area and knocks Cap unconscious.

He awakens with Spider-Man by his side, who informs him that the Serpent and Skadi had left and that everyone was injured. He then makes a request to leave and be with his family.

Meanwhile, Franklin, against the orders of his parents, uses his powers to release Angrir's control over the Thing and return him to normal, healing him in the process. An exhausted Thor is still fighting Nul. Knowing that he cannot win in his condition, he sends Nul into orbit, where he is seen falling to an unknown location. Thor says "to be continued, Banner" then collapses.

The Avengers watch as Spider-Man leaves the battlefield. Hawkeye asks Cap why he allowed him to stand down, to which he replies that he is right and that they are going to lose.


Thor. Hulk. Thing. Its time for the fight to end all fights. And while it rages, the Serpent's forces deal Captain America a blow that not even he can withstand.

Retrieved from "https://heykidscomics.fandom.com/wiki/Fear_Itself_Vol_1_5?oldid=1695334"
Community content is available under CC-BY-SA unless otherwise noted.