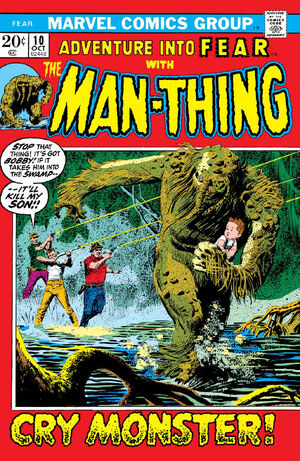 In his own series at last! The macabre Man-Thing - perhaps the most monstrous "hero" ever! Script by Conway - art by Gray Morrow!

Appearing in "The Spell of the Sea Witch!"Edit

Synopsis for "The Spell of the Sea Witch!"Edit

Bugsy robs a bank, and runs for it. He hijacks a motorboat with innocents, Ted and Jan aboard. Fleeing to international waters, they come across a ghost ship. The Ghost Pirate Captain convinces Bugsy to dig up some buried treasure, while the Ghost First Mate frees Ted and Jan, telling them the ghosts are really actors. Having done a good deed, and atoned for their sins, the ghosts are freed from the curse, and fade away. Bugsy is left stranded alone on a desert island.

Retrieved from "https://heykidscomics.fandom.com/wiki/Fear_Vol_1_10?oldid=1720294"
Community content is available under CC-BY-SA unless otherwise noted.