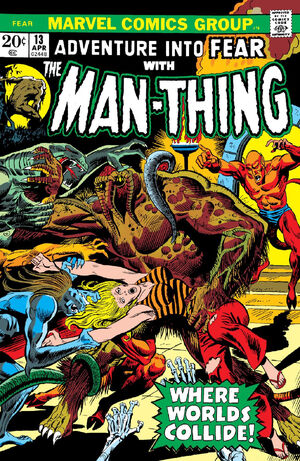 Appearing in "Where Worlds Collide!"Edit

Synopsis for "Where Worlds Collide!"Edit

When Jennifer Kale's grandfather and his cult prepare to defend the Earth with the help of the Tome of Zhared-Na, and the Man-Thing, they discover the book is missing, leading the other cult members to believe that the elder Kale stole the book. Nobody is wise to the fact that Jennifer, in her previous encounter with the Man-Thing was forced to burn the book. When she relates to the story to her ex-boyfriend Jaxon, he scoffs at the story and decides to explore the swamp, in spite of her best warnings. Jaxon is then possessed by a demon that appears in the swamp.

Jaxon is then sent to capture the Kale family, and succeeds in doing so, however the Man-Thing follows Jaxon and the Kale's in to Thog's realm. There Man-Thing is changed back into Ted Sallis and tempted with various pleasures. Ted refuses and is reverted back into the Man-Thing. The creature then seemingly slays Thog, and Jaxon, and frees the Kale's before returning to the swamp where it lives.

Retrieved from "https://heykidscomics.fandom.com/wiki/Fear_Vol_1_13?oldid=1496621"
Community content is available under CC-BY-SA unless otherwise noted.