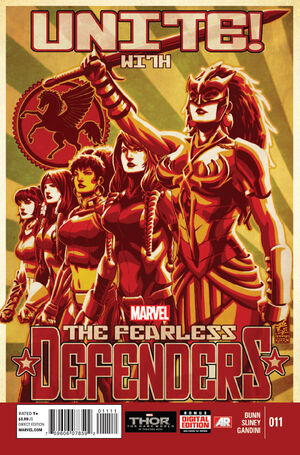 Hippolyta invites the Fearless Defenders to New Amazonia apparently just for some rest and relaxation, but is really so she may also tell them something. There, Hippolyta explains that she has been charged by the Death-Lords to rebuild the ranks of the Amazons in exchange for her resurrection. The following morning, New Amazonia is attacked by Aradnea, Echidna, and Echidna's sea-monsters on-orders from Caroline Le Fey. After the monsters are defeated, Caroline reveals that the attack was a test and offers to become the Amazons' queen.

Secrets of Hippolyta’s resurrection are revealed!

And love is in the air for the Fearless Defenders!

Retrieved from "https://heykidscomics.fandom.com/wiki/Fearless_Defenders_Vol_1_11?oldid=1426406"
Community content is available under CC-BY-SA unless otherwise noted.