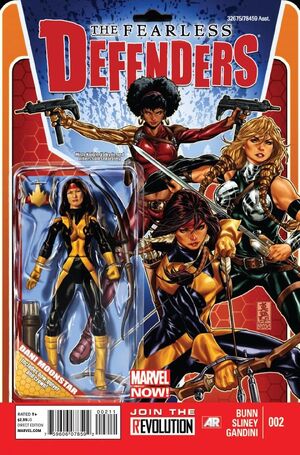 Stay your hand. Though your actions are foolish, your sentiment is admirable. It would be a cruely of fate if you forced me to smite you. After all, we've only just met.

At 1128 Mission Street in San Francisco, a team of mercenaries break into the house to kidnap Dani Moonstar, the "leader of the New Mutants" who is "no longer a mutant herself." Dani subdues them with nothing more than a bow and arrows, but is soon tranquilized herself by Mr. Raven.

In Broxton, Oklahoma, Valkyrie, Misty, and Riggs stop at a diner for breakfast, and Misty considers just how "big...the world is."

"Elsewhere," Dani regains consciousness to find herself restrained in a massive stone throne. As a stone mask is locked into place over Dani's head, Caroline le Fay explains that she has kidnapped Dani because she wants "to become a Valkyrie."

Valkyrie, Misty and Riggs arrive in Asgardia, and Valkyrie assures Riggs that their kiss "is a small matter." The three meet with the All-Mother, who warns that the return of the Doommaidens "will bring naught but madness, destruction and death"; the All-Mother proposes that Valkyrie's failure to "assemble the host of the Valkyrior...has created a void in the natural order," and Hela appears, confirming that the Doommaidens have returned "to finish their work."

Valkyrie fights Hela, and Misty attempts to intervene before Hela easily subdues her; Riggs attempts to retrieve Dragonfang, but is stopped by Hippolyta, the "warhawk of Ares."

• Valkyrie and Misty prepare to take on the Doom Maidens.

• Plus: A closer look at our sadistic new villain!

Retrieved from "https://heykidscomics.fandom.com/wiki/Fearless_Defenders_Vol_1_2?oldid=1426397"
Community content is available under CC-BY-SA unless otherwise noted.